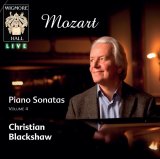 The New York Times
The Best Classical Music Recordings of 2015

This last release of Mr. Blackshaw’s Mozart cycle, recorded live, is another welcome demonstration of his immaculate tone, delicate way with pacing and exquisite taste in articulation. In four sonatas taken from across the composer’s life, there is never a note of hurry or haste, and nothing that fails to enchant.
David Allen, The New York Times, 10.12.15

Hoist with my own petard, I think. Reviewing Igor Levit’s Bach/Beethoven/Rzewski Variations (11/15), I rashly concluded that I would be lucky to hear as fine a piano recording this year (meaning Gramophone Award year, rather than calendar year, incidentally). And, lo and behold, here is one.

Christian Blackshaw’s Mozart is a known quantity, of course, and I doubt whether any of the superlatives below hasn’t been applied to the previous three volumes in his Wigmore Hall Live series. But permit me to join the chorus of acclaim for his elegance of phrasing, limpid tone quality (captured in a demonstration-quality recording), tastefulness of nuance and ornamentation, and imaginative response to harmony and character. Every tiniest detail here is thought through, and only the most painstaking forensics would find the slightest fault in the fingerwork (a very few bass notes don’t quite speak, and even more rarely an ornament is less than silky smooth, if you want to know). Yet nothing is fetishised. Perfection – or something very close to it – is in the service of freedom.

As Blackshaw himself notes, ‘the sonatas resemble mini-operas’. But how to apply that insight with discretion and variety, with humanity but without histrionics, is a rare gift. Blackshaw is one of the few who know how to make the music sing and dance without making a song and dance of it. And alongside operatic eloquence, his treatment of the surrounding texture suggests the civilised conversation and wit of Mozart’s wind serenades.

Never have the 16 minutes of the first movement of the A major Sonata (K331) passed more graciously, for me at least, and the acknowledgement of the Adagio marking for the fifth variation is exquisitely tasteful. At the end of the C major Sonata (K309), how delectable is the tiny relaxation of pulse to allow the lowest register to speak. How subtly weighted are the fp accents in the slow movement of the F major, and how perfectly adapted to their harmonic environment. Even the wonderful Uchida sounds occasionally a fraction effortful by comparison.

Regretfully, I have to note that this volume completes Blackshaw’s survey of the sonatas. I can only hope for a set of the fantasies, rondos and miscellanea so that I can continue this paean.
David Fanning, Gramophone Magazine, 16.5.16

Donald Tovey described the sonatas as written with his left hand while the composer was occupied with greater things. Yet so searching and satisfying is Blackshaw s playing, so felicitous his touch, we have no sense of inferior works, least of all the two on the second disc, the sparkling K576 and the irresistible K533, with its richly decorated, Bach-inspired slow movement
David Cairns, The Sunday Times, 18th October 2015

Mozart's Piano Sonatas, important landmarks in any pianists repertoire, are seen as both wild improvisatory melodies and challenging exercises for Mozart s pupils. In this, the conclusion of Christian Blackshaw's complete Mozart Piano Sonatas, recorded live at Wigmore Hall, we hear four sonatas that extend from the composer s early years until shortly before his death. Each sonata is bought to life through Blackshaw's luminous tone, compelling delicacy and virtuosity, as he explores the works with fresh insight and superlative musicality. http://www.amazon.co.uk/gp/product/B0127WVPUC?keywords=christian%20blackshaw&qid=1449408003&ref_=sr_1_2&sr=8-2 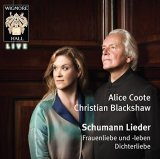 The uniquely thoughtful and penetrating insights offered by Alice Coote’s Winterreise and Christian Blackshaw’s Mozart in their respective earlier Wigmore Hall Live CDs led to high expectations of the collaboration of these two musicians at this recital last summer. And we were not disappointed. As one may hear on this album, from the very start, Schumann’s ‘bouquet’ of lovesongs is lightly held, thanks in no small part to Blackshaw’s influence in lightening and focusing Coote’s mezzo, so that we are not blown away by over-warm outbreaths of intensity.

And the sense of awe and wonder which hovers over this entire recital is particularly close-focused in the song cycle Frauenliebe und -Leben. Blackshaw’s piano playing is the ever-shifting heartbeat behind the wonderfully supple expressive contours of Coote’s voice, eloquently tracing those of Schumann’s melody. Blackshaw seldom allows Coote to become vocally side-tracked by the intensity of her moment-by-moment response: rather, they recreate together the elusive movement of the music’s whispered breath and being.

From the very start of Dichterliebe, Blackshaw again ensures clarity and evenness of pace, through Coote’s beautifully poised, sighing breath. He powerfully supports the piercing anguish of loss in her high register, and the dark longing and despair expressed within her chest voice. This performance revealingly searches out the cycle’s paradoxes of life and death, dream and reality, time and eternity. And the emotional narrative of Blackshaw’s piano postludes continues long after Coote’s final and breath-taking vocal disembodiment.
Hilary Finch, BBC Music Magazine, 13th October 2016

From the passion of ‘Widmung’, ‘Du bist wie eine Blume’ and ‘Die Lotusblume’, to jewels of the Lieder repertoire Frauenliebe und –leben and Dichterliebe, these kaleidoscopic explorations of love are captured live in recital at Wigmore Hall. https://www.amazon.co.uk/Schumann-Lieder-Wigmore-Hall-Live/dp/B019NZNOFK/ref=sr_1_1?ie=UTF8&qid=1506944357&sr=8-1&keywords=christian+blackshaw+alice+coote 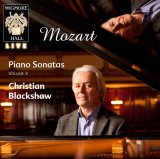 In the third instalment of Christian Blackshaw's complete Mozart Piano Sonatas recorded live at Wigmore Hall, we journey through 14 years of composition exploring five contrasting works filled with emotional outpouring and harmonic invention. From Sonata No. 6 in D major, written in Munich during a musically fruitful yet financially difficult period, to Sonata No. 14 in C minor, in which Mozart refuses to conform to the formality expected of the genre, this sublime recording demonstrates Christian Blackshaw's captivating sensitivity and incomparable musicianship. http://www.amazon.co.uk/Mozart-Piano-Sonatas-Christian-Blackshaw/dp/B00VEFZ53M/ref=sr_1_1?ie=UTF8&qid=1436804331&sr=8-1&keywords=christian+blackshaw 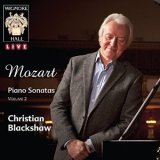 A deeply passionate and sensitive performer, Christian Blackshaw is justly celebrated for the incomparable musicality of his performances. He performed the complete Mozart piano sonatas at Wigmore Hall between 2012 and 2013, and this is the second of four volumes recorded for Wigmore Hall Live. Volume 1 was awarded Editor's Choice in both BBC Music and Gramophone Magazines. 'What glories then are contained in this cycle of works by Mozart? For me, they imbue the spirit with joy, laughter, sadness, contemplation, exhilaration: the challenge always is to give full life to their individual character. For the new listener, what wonderful surprises await. For the well-acquainted listener, how fortunate to return to them eager to be enchanted again.' Christian Blackshaw 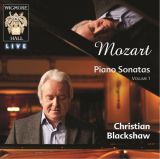 A deeply passionate and sensitive performer, Christian Blackshaw is celebrated for the tremendous emotional depth, great understanding and incomparable musicality of his performances. He performed the complete Mozart piano sonatas at Wigmore Hall between 2012 and 2013, and this is the first of four volumes recorded for Wigmore Hall Live. Of these great works, justifiably considered to be at the pinnacle of the solo piano repertoire, Blackshaw says: 'to my mind, the sonatas resemble mini operas, even if conceived for and performed by a solo player… For me, they imbue the spirit with joy, laughter, sadness, contemplation, exhilaration.' In 2010 he completed a Mozart Sonata cycle at St George's Bristol, BBC Music Magazine writing of his final concert that it was 'one of the finest Mozart recitals I've heard in years.' During the summer of 2012 he performed another in St Petersburg where he appeared at Valery Gergiev's White Nights Festival, before a triumphant return to the Southbank International Piano Series. His hugely acclaimed Wigmore Hall Mozart sonata series concluded in January 2013. http://www.amazon.co.uk/Mozart-Piano-Sonatas-Christian-Blackshaw/dp/B00E4V0CEK/ref=cm_cr_pr_product_top